WISSA 2020 is open to the three winter surf classes - sleds (both with skates and skis), wings and kites. In the competition, the participants split into two main groups, sleds and wings competing together on the same track with the same judges. Kites have their own track and team of judges.

In the sled class, the World Championships has three disciplines - course race, slalom and speed. With longest history, undoubtedly, is a course race for ski sleds. Today's modern sleds with skates can be used in course race as well, but only in thinner snow or no-snow conditions. The organizer here offers opportunities for both ski and skate sleds, meaning that the course race can be either classic upwind and downwind or a track combined with slalom elements. Decisions on the course race tracks will be made according to the weather conditions.

Fod sleds, the most popular discipline of recent years is slalom, especially among younger competitors. It is rumoured that the best slalom sleds are essentially out of the market for this season, and young people are already making slalom sleds themselves. The third discipline is speed race, where the competitor must have a personal GPS device. The best 1x10 sec result recordes with the GPS GT31 / GT-11, Locosys GW-52 or GW-60 GPS units are considered. The speed can be driven any time throughout the race period, in the competition area.

The class of wings competes on the same tracks and in the same disciplines as sleds. The difference is only in divisions because the wing class is predominantly of the older generation. This is how the super veteran division (born 1954 or earlier) is opened in the wing class.

Kites are the youngest class of winter surfing. For the kites, there will be the disciplines of course race, freestyle and speed race. There are separate classes for the kites with skis, the kites with snowboards and a separate division for the tube kites. The tube kites division also includes the youngest (U17). To make racing more interesting, we are adding the downwind slalom course race track for kites.

While the course race for kites is a so-called "old school" discipline, the new wind in kite is freestyle. As things developed, the organizing committee also made a small change to the freestyle. Skis and snowboards now compete separately - in two separate eliminations, because the tricks on the kite with skis or kite with a snowboard are slightly different in characteristics and level. Freestyle elements, difficulty levels and extras are evaluated by kite freelance professionals - judges. Kite speed riders compete on a common basis with their GPS units, similar to sleds and wings.
The Marathon discipline is open to all three classes, but it is a reserve area that is held only when very good circumstances coincide.

Below are some examples of the WISSA 2020 tracks: 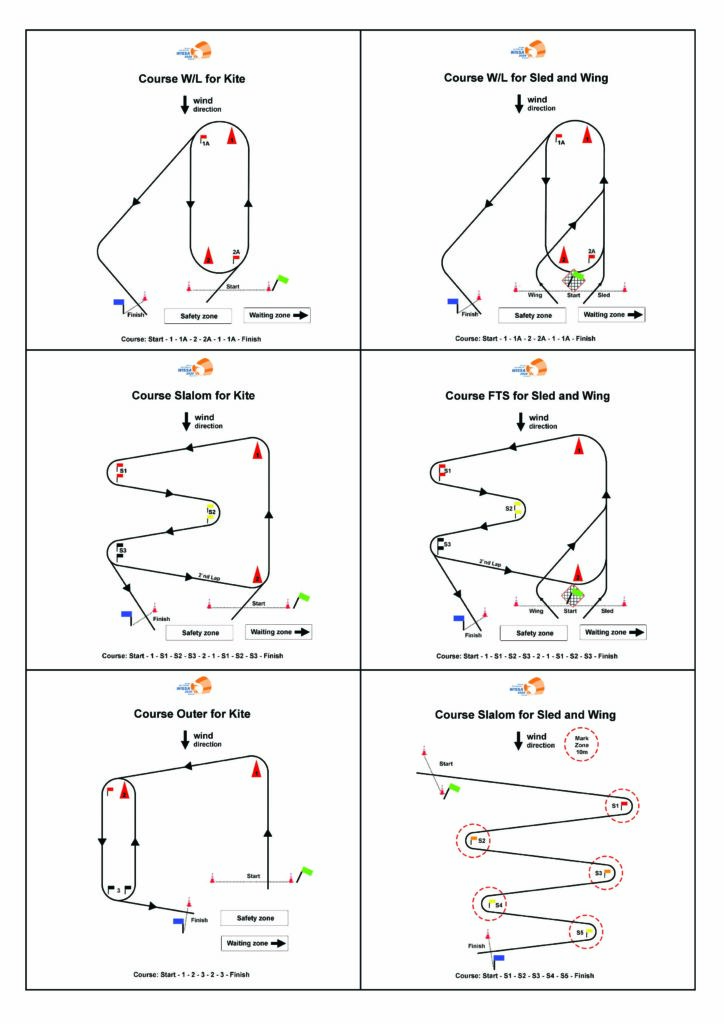